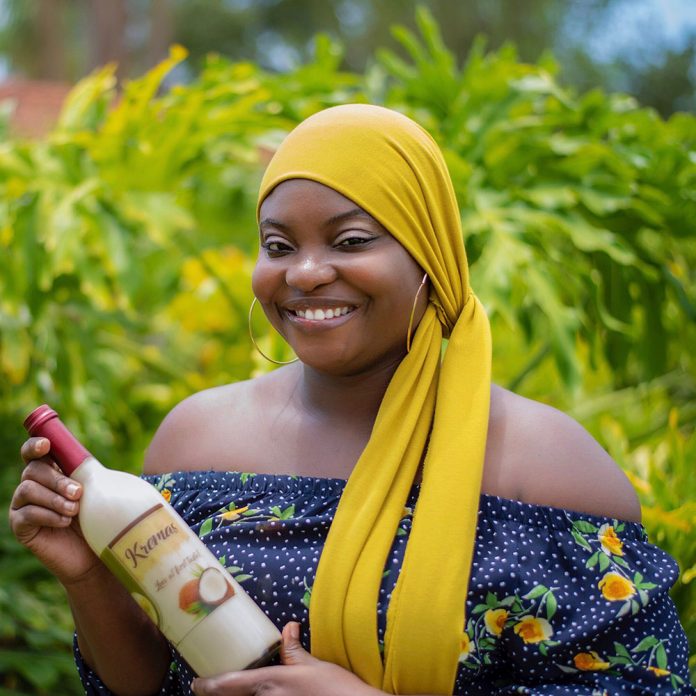 Saveurs Lakay Kremas is a popular Haitian alcoholic drink concocted by Srane E. Dessables, a woman of incredible willpower and determination. Her journey into Haitian Kremas began in the Dominican Republic, and after coming to America, homesickness led her to try to improve on the traditional recipe from Haiti. Eventually, she came up with Saveurs Lakay kremas.

She didn’t follow a particular recipe, so the result was a unique creation that, according to her friends, was delicious. The process took many failed attempts but, in the end, Saveurs Lakay Kremas took form. The name means “flavors from home” – a perfect reflection of her homesickness turned into a love for Haiti!

She is Haitian-born and raised, served her country as a medical doctor for more than six years, and is now pursuing a medical career in the United States. After migrating to America in 2016, her homesickness resurfaced and she again started making Kremas. This time, a bunch of friends kept asking her for it, which gave her the idea to serve homesick Haitian expatriates.

Now, she’s a proud business owner and the genius behind Saveurs Lakay. This Haitian beverage is a sweet alcoholic drink made from creamed coconut, rum, cinnamon, lemon, sweetened condensed milk, and more. It’s a traditional holiday drink in Haiti! Saveurs Lakay is based in Florida and has served thousands of customers.

Srane wanted to bring the Haitian Diaspora a sweet and exotic taste from her native country, and that’s exactly what she’s done with Kremas. Balancing family life, academia, and entrepreneurship didn’t slow the young woman’s momentum either, as she reconciled everything wonderfully. Her mission was clear: you don’t have to lose your culture after leaving your motherland – and her Haitian-owned business is a powerful reminder of that.

It’s even more fascinating that the origin of the Saveurs Lakay phenomenon was nothing more than a feeling of homesickness. It wasn’t a grand dream that eventually came to fruition, but a simple moment of remembrance for her country. That moment eventually galvanized the perfected recipe of Kremas Saveurs Lakay, Srane’s unique recipe.

Saveurs Lakay’s popularity isn’t only due to its delicious flavor and sweet aroma. Indeed, the drink is creamy, sweet, and otherwise scrumptious, a true close cousin of Haiti’s Kremas. But the woman behind the beverage also deserves a round of applause for her leadership of her company and love for her country.

She devised a superior customer relationship management system that relies on customer feedback to improve the company’s services. The drink remains the same but customer interactions have gone through several improvements over the years. Srane E. Dessables is determined to innovate Savers Lakay as much as possible and obtain international recognition for its quality.

In all honesty, Savers Lakay Kremas is already becoming a standard among other Kremas beverages. Srane may have fumbled from failure to failure to find this recipe, but all that work had paid off. You can taste Saveurs Lakay Kremas by visiting (WWW.FREEKREMAS.COM) and request two samples, which will be sent to you anywhere in the U.S. for free as a gift from Srane E. Dessables to you.