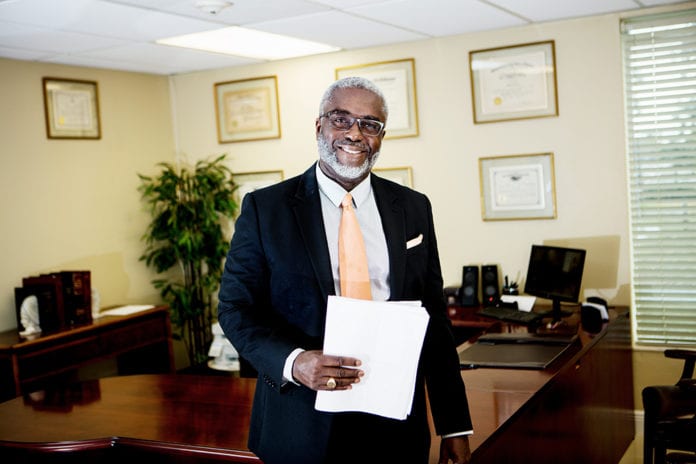 By Sarah Brutus @sarahprworldwide and Photos by Johny Luc @redlightphotos

Where were you born? What was your upbringing like?

I was born in Port Au Prince, Haiti. My father was a dentist and my mother was a kindergarten school teacher. While in Haiti, I attended the school Petit Seminaire College St. Martial. I left Haiti at the age of 14. My parents sent me to New York with the idea that I would go to dental school, be a dentist and come back to Haiti and continue the practice.

What did you decide to do after high school?

After high school, I started college at Manhattan Community College. I later moved to Boston with relatives and transferred to the University of Massachusetts Boston. I graduated there with my Bachelors of Science in 1982. I started law school that same year at a school called Suffolk University School of Law in Boston. That school sat right behind the State House, where the legislature met. I used to see the senators and representatives and say, ‘Wow, one day I will be like them.’ Later down the line I was the first Haitian-American elected to the legislature here in Florida.

What did you decide to do after law school?

After Law School I took everything I owned and decided that I would not be staying in Boston, and got in my car and drove down to Miami. I had a cousin living down here and looked him up. From there, I met Father Gerard Jean Juste and I started getting acclimated here. I started practicing law here in 1985.

What was your experience as a young attorney in South Florida?

I was 27 years old when I moved here and started practicing. It was a very difficult time, because during that era Haitians had no rights. I joined the NAACP, became an active member and volunteered as counsel. There was also a time in the early ’90s when the Coast Guards rescued about 12 Cubans at sea and brought them to shore, but at the same time the Haitians at sea were turned away and sent back to Haiti. This started a hunger strike that I and several other Haitian Americans & African Americans participated in for 21 days to protest this unfair and discriminatory practice. I continued to be active and participated in every protest and every march.

What is one of your most memorable experiences in aiding the Haitian community as an attorney?

In the early 1990s there was a time when there were daily protests from about 4 to 6 p.m. on 79th St. in Little Haiti. After a while the business owners and people in the area became upset with this, as it blocked traffic in the area every afternoon. One of those days, the City of Miami Police Department decided to come out to clear the crowd. My office was at the old Barnett Bank building that was on the corner. I will never forget what I saw. It was a bloodbath. They arrested over 250 people. I got on the radio and said I would represent them for free because they were arrested for defending their rights as Haitian immigrants. I spent several months working on all of these cases to get people out, without charging them any money.

How did you get started in your political career?

In 1994, I decided to run for judge. At that time there was a campaign to oust all of the black judges. They were scared. As young Haitian-American lawyer, a descendant of people who broke the chains of slavery, the activist in me said let me run. That’s why I ran. I wanted to make a statement. I got 45,000 votes. He got 100,000. At the same time, that got me thinking … 45,000 people voted for me. I really had a chance at getting elected into office. In 1998, I decided to run for the State house. The person I was running against was part of the Democratic Party, but really a Republican in disguise based on what she was voting for. I lost that election by 51 votes. I technically won that race, because one of the precincts lost a ballot box overnight and they found it open the next day. In 2000, I ran for the state legislature again and won with 87 percent of the vote. I was the first Haitian-American to serve there. That was important to me, to be a representative for my culture and race. I served for six years. I secured $2.3 million for the first health clinic built in Little Haiti. I also worked on certain streets in North Miami named after heroes of Haiti’s independence that you can still see today, as well as some other important African American figures. There was also a bill in 2001 that was being attempted to be passed that would prevent immigrants from driving in the United States unless they had permanent residency or citizenship. I fought tooth and nail to ensure that bill did not pass. There were a lot of other bills that I worked on and funding that I secured. I also later ran for County Commission in 2006. I lost by 250 votes. In 2010 I ran for Congress, and 2011 I ran for State Senate and lost by 200 votes. In 2014, I ran for the House and lost due to a split vote. I filed to run for State Senate in 2016 as an Independent and lost, as I was not a party affiliate.

Any advice that you would give to young people?

I would say to high school and college students: keep your eyes on the prize. Don’t let people decide who you are or what you are going to be. You are the master of your own destiny. If you want to be something, you have to stay at it. Work hard, stay in school and don’t be discouraged. Stay the course. Stand up for your rights, don’t give up the fight. Your life is your right.

Where do you see yourself and your career in the next 10 years?

With seeing the direction the community is taking, I have sort of stepped out of that force field. I’m on a spiritual quest right now. I’m reading a great book called The Seat of the Soul by Gary Zukav. I would like to think I would be retired, at my home writing poetry, tending to my garden, and enjoying what life has to offer. But sometimes I still have the idea or burning desire to run for office again to be able to set the tone for elected officials. But I want to enjoy life, the birds, the bees, the sun, the moon, and my future grandchildren.