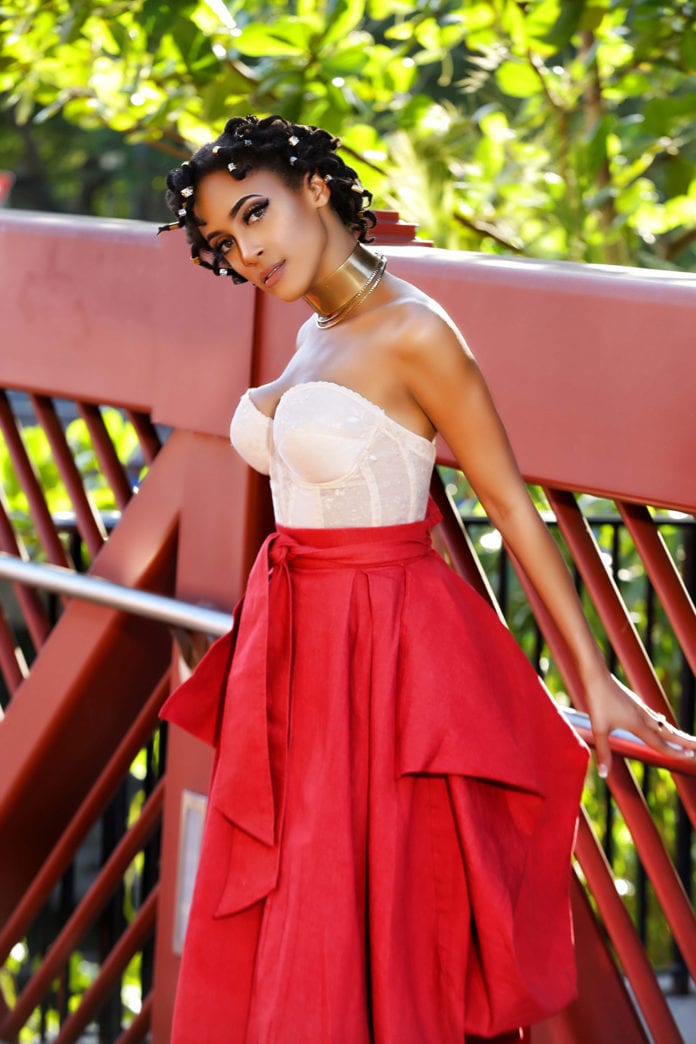 Phyllisia Ross, how did you get started with music?

I got started playing the piano when I was three years old, and at the age five I discovered I could sing. It never stopped from there. I’ve studied all kinds of music, from Broadway and jazz, to classical, and concert style. My parents have always been fully supportive of me, even in times when I have said I’m done with music. They have told me that this is my calling.

Did you ever plan on getting into the Compa/Zouk world of music?

It wasn’t part of the plan. I had written a song after the Haiti Earthquake in 2010, just out of feeling, when I was sitting in the studio watching all the news. I just started writing L’union Fait La Force as a dedication piece in Creole, which I’ve never done before. From there, Konsa was a test record to see if it could be successful – and we can see what happened with that.

What it is like being a female artist in a male-dominated industry?

I find it one of the biggest difficulties imaginable. A lot of artists get trapped in it being just about the sex appeal and not enough about the music. My fan base has allowed me to enjoy being a woman, which includes being sexy, being risqué, being fun, but also showing that I am very serious about my music. That is the most important currency.

My fan base has allowed me to enjoy being a woman which includes being sexy, being risqué, being fun…

Did you expect your debut song in the Compa/Zouk industry, “Konsa”, to be so successful?

When we did Konsa, I was leaving a situation and moving into a new situation. I had just moved, and like I said, we did it as a test. You never know what the success of these songs is going to be. God is so good, and I am thankful for everything he provides.

A lot of fans are waiting for the Phyllisia Ross album. Is that in the works?

My fans are the reason I’m doing an album. So I am going to deliver it to them. They can expect a world-music album of many styles. Many genres. Not just Compa, not just Zouk. There will be R&B, world sounds, Afro sounds, and sounds from other Caribbean nations. I’m a limitless person with limitless expectations and ideas, so you can definitely expect that this year.

You’ve had a lot of success with your videos. You have gotten millions of views. What do you think makes your videos so appealing and successful?

Lux Media and Marketing has done a great job helping me create these videos. Abdias Laguerre is a fantastic video director. He shot a lot of the videos on the project. As far as the aesthetic is concerned, for the first few, I did the styling and make-up myself, with my mom. I want to bring back that old-school version of sexy, which is sensual. So I think the magic behind that has been really catering to the way that I want people to see me.

What’s been your most memorable stage performance in the HMI?

Where are you from?

I was born in Miami, raised in West Palm Beach. I went to college in Miami. I would say that the whole of South Florida is my stomping ground. I’ve lived in New York for the past four years, and I was quasi living in France because of how much I traveled there this past year. But yes, I’m a Florida girl. I love my sun.

Any advice that you would give a young lady who looks up to you and wants to get started in music?

Don’t do it if you’re not a servant of the music. The ridiculous hardships that you will undoubtedly deal with are very damning and heartbreaking to some people. Leave it to the people that are about that life. When you really care about the music, all the good things will come. Don’t wait for people to do stuff for you. Take responsibility. Invest in yourself. Meaning, financially, take the money that you worked so hard for, put it back into yourself, and the art and you will be realized. But if you can’t commit to those things, don’t waste your time.

Where do you see your career going in the next 10 years?

I see myself on the biggest stages all over the world, performing all styles and genres of music. I see myself as a philanthropist assisting different causes that I believe in. Being able to give others guidance. I want to see the world through music

Any artists or bands in the HMI that you want to collab with that you haven’t gotten a chance to yet?

What do you do when you’re not working?

What is not working? I never take a day off. It’s funny, people think me working is just singing on stage. The music is about 15% of what I do. I manage my business and logistics, from flights to business deals. So the weekends are reserved for traveling and performing, and weekdays are left for sessions, writing, recording, and business. But when I do take time off, it’s to eat and drink wine. That’s my relaxing time. I never sleep. It’s pretty intense. I have to schedule in naps. Because of my job, I have to do it. But I’m a workaholic. But that’s what it takes right now.

What is your favorite food?

I do not have a favorite food. It depends on the time, on the weather, it depends on where I am, it depends on what kind of wine goes with it. I’m just a foodie. I just like quality in life, the best of the best. Of course, Haitian food no doubt. I love a nice seafood platter. When I’m traveling I like to engage with the food of the culture or region.

Are you an only child?

Anything that you want to say to your fans and supporters?

Yes. God bless you all. Thank you for the encouragement and support. Don’t be afraid. Be fearless, be courageous. Follow that path that is yours. Let’s do this thing together. Let’s enjoy life, and thank you for everything.

One last question. Are you single? People love that question. My boyfriend is my music. That’s always my answer.